Prior, at the foot of Gore 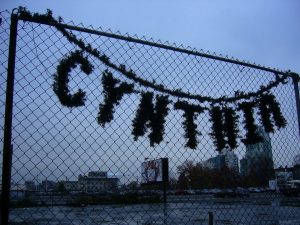 At the south end of Gore, a large space sits waiting, almost empty again. Less than a year ago, new perimeter fences appeared and the ground was covered with huge white, shrink wrapped tents – a staging ground for the Winter Games. Every 15 feet or so, a sign warned the neighbourhood to keep it’s distance. The space was now within the ‘Secure Zone’. Before this happened, the site lay neglected, weeds and the remains of razed warehouses. A schematic arrangement of cracked concrete aprons, broken foundations and bent re-bar. In spring and summer, the space became an impromptu skate park, with the autumn rains, it turned into a shallow pond, a resting spot for migrant geese and gulls driven inland by ocean storms. A few years before that, the space functioned as a sort of refuge, with stands of rank grass crisscrossed by coyote paths and scattered groves of scrubby birches, screening the occasional temporary shelter. More recently it has served as a dumping ground, a car park and a Hollywood North film set. The future of the site? A re-located Saint Paul’s Hospital complex, re-claimed riparian parkland, floodlit soccer fields, community gardens, a community centre, a shopping centre? All kinds of schemes and proposals, a long list of wants, a few pipe-dreams, a world of possibilities and some very specific needs. Right now, for the next little while at least, the space belongs to – Cynthia.