Terminal and Western, just behind Main. 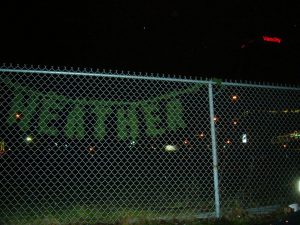 Another vacant lot, quarantined, waiting for the past to leach away. Another cold morning, black sky threatening snow. It’s the day before Christmas Eve and I’m up early, way before dawn and on my way to work. I pass the spot where Kerry was and the corner where Cara used to be. I move past Inga, whose almost gone now, see Debra and then cut across National and over to Station Street, not far from where Cynthia still is. And all the way along, I walk past women whose names I don’t know, still at work in the shadows.

Just over a year ago, the first garland with this same name appeared. It was only the second garland that I’d installed and it stayed up throughout the winter and spring and right into early summer, before it disappeared.
I cut through the darkness of Thornton Park and look across to the lights on Main Street and see silhouetted figures, huddled under the arcade next to the Skytrain station. Men in small groups, moving in and out of the shadows, smoking and spitting, waiting for the temporary labour office to open and daybreak and other kinds of work.
As lone commuters trickle off buses and stumble towards the station, I creep across Terminal and sidle up to the fenced off lot that backs onto Western Street. Bristling green strips of PVC, probably the same material that’s used to make the garlands, are threaded through the chain link, screening three sides of the lot from view, though there’s really nothing left in it to see. The side that faces away from Main is uncovered and headlights from the first few cars coming up Terminal seem to flick over and past me and peer into the void of the deserted lot for a second or two, before quickly glancing away. The garland goes up fast and the lot no longer feels quite so empty. I take a couple of hurried photos and then rush off to catch the first Skytrain for my last day of work before the holiday.
A week later, at dusk on the day after New Years, I’m on my way home from work and I look down from the station platform, into the lot across the street and the garland is no longer there.
The holidays are over, another year has passed, seasons and other people have come and gone. More abandoned spaces, other names that need to be remembered and another empty place, where I’ll always look and expect to see another – Heather.

One comment on “Terminal and Western, just behind Main.”