The surrounding streets are filled w/ film trucks, the night sky crackles w/ walkie talkie chatter. The corner of Gore and Powell is lit up brighter than daytime. Police are posted at the mouths of all the nearby alleys and private security guards patrol the shadowed sidewalks, keeping an eye on the equipment. I slip an orange safety vest into my pocket, in case I have to pass myself off as a film crew roadie and head away from the noise of Hollywood North. Further along Railway, it starts to get quieter and the streets feel empty. Overlooking the docks, in a gap between the warehouses, there’s a small stand of fir trees. Underneath them it’s dark and deserted. Almost. The warning lights flickering on top of the shipping cranes shine down through the boughs like stars, softly illuminating – Mona. 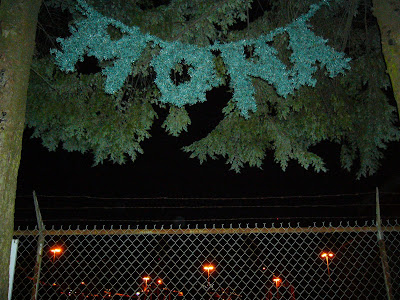