Main, between Terminal and Industrial 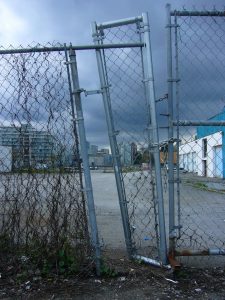 About 10 years ago, when I first noticed this lot being put up for sale, the real estate signage bolted to the fence claimed that this stretch of Main Street received exposure to over 50,000 cars a day. That’s a lot of traffic. I remember thinking at the time, that the number seemed incredibly high, but the site was a car lot, so I figured somebody must have known what they were talking about. I imagined that if you added in the occasional carpool passenger and factored in all the commuters packed onto buses, wandering pedestrians and the occasional, virtuous cyclist, you’d have, what, a total of 75,000 sets of eyes passing by that spot every day? That’s a lot of witnesses.

Behind the lot and across Quebec Street there used to be a large patch of scrubland, which concealed a number of modest living structures; a refuge for old timers who combed the shores of False Creek and migrated back and forth between the bush and the McDonald’s on the corner of Main and Terminal. A number of warehouses and manufacturers were still in full swing and the city works yard underneath the Cambie Street Bridge, kept a steady flow of dump trucks and garbage trucks rumbling along 2nd Avenue during the day. At night, women worked in the deserted industrial areas just off Main and the residential alleys that sloped down towards the foot of Mount Pleasant. 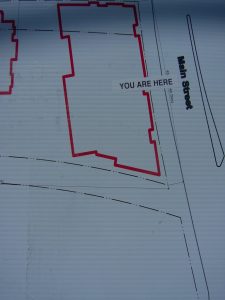 Gradually the scrubland got cleaned out and paved and over the next few years the area was used as a pit stop for the Indy, an impromptu in-line skate park, a gathering place for Dragon Boat races and a location shoot for various film productions. Construction cranes started to dot the surrounding skyline and before long most of the remaining industry between 2nd Avenue and False Creek was squeezed out or trickled away. Access to the water was almost completely closed off and for a long time there wasn’t much more to the area than a fenced in bike path running the gauntlet of excavators and soil remediation equipment. As towers and box stores began to take shape in the near distance and as the city got ready to invite the world to the Winter Olympics, a narrow strip of the foreshore was replanted with indigenous species to mimic the area’s original ecology, rehabilitated with boardwalks, promenades and public art and reopened, this time as a designated green space. 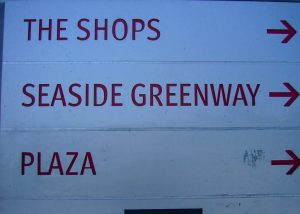 Cut to the last few years, with the Downtown Eastside becoming a gentrification hotspot and more and more people funneling up Main Street and into the old city core to eat, party and live and you could maybe plan on somewhere around a 125,000 people a day passing by that identical place? That’s a lot of bodies.
It was towards the end of March, when I hung the garland up on the car lot fence. It was the second last garland of the Evergreen project and the second garland I’d made for this particular name; the other one was placed on another fence, in another location, for a different person, but for the same reason. I considered the new traffic numbers and I wondered how many other people would share the name I’d spelled out and what were the odds now that anyone passing by would have known the person the garland was made for? 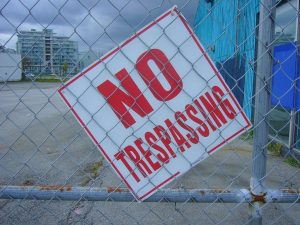 The car lot changed hands, was emptied, re-opened, scaled down, subdivided and despite a brief spell as a Winter Olympic transport depot, just over a year ago, it’s now vacant again, though some new on-site signage hints at a major real estate development coming soon. Residential, Retail, Industrial. Not far away, beside a re-tweaked False Creek, the post-Olympic Village is starting to fill up and every day the lower slopes of Mount Pleasant become pitted and dotted with more holes and the hoardings that signify new condos.
Given this latest round of activity, I’m willing to bet you could now bump up the daily drive by figures for the car lot fence to at least 150, 000 a day. Which would mean that even though this one particular garland only stayed up for about 3 1/2 weeks, say 25 days, it’s possible that some 3,750,00 people got a chance to read the name. That seems incredible to me. 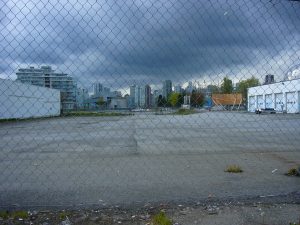 And I guess, by extrapolation, you could say that, averaging it all out, in the 10 or so years that the fate of this one car lot has been in question, roughly 270 million pairs of eyes passed by this very same spot, while not that far away, in the neighbourhood just up the road, more than 60 women went missing. I find those figures and what they imply more than incredible, they’re hard to contemplate, especially since one of those pairs of eyes was mine.
So many people passing through such a small piece of real estate. So many potential witnesses, victims or innocent bystanders. So many names. So much hope and growth and change, so many things abandoned, repurposed or still waiting to be reclaimed. So many friends and strangers and people we wish we could have known and only one who was exactly like – Andrea. 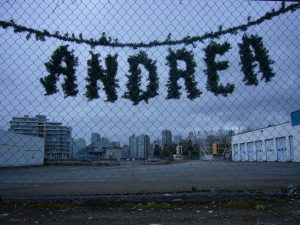