It was late at night when I headed out, skirting the edges of the warehouse district just behind Venables. The streets were empty except for the occasional taxi cruising into or out of the depot at the far end of Vernon drive. And almost quiet. The only sound, beside the soft wash of light traffic up on Clark Drive, was the throb of an idling freight truck backed into a loading bay somewhere nearby.
The garland was a large one and I had it looped around and over me to keep it from dragging on the ground and picking up garbage. Moving through the murky puddles of light under street lamps and caught once in the glare of a pair of headlights, I must have looked like a cedar hedge shuffling off under the cover of darkness, trying to find somewhere else to take root.
I cut up onto Clark drive, where it climbs to become a ridge, just before the Grandview Cut. A long time ago, the tidal flats of False Creek would have come right up to the base of the slope. China Creek, on the other side of the Cut, was a natural ravine where all the streams in the area converged and drained into the salt marsh. The trees would have been alive with birds and the streams full of fish.
The ground is probably still pretty toxic from years of industry and dumping.Most of the flats is a landfill, soil that was excavated from up the hill to make the Grandview Cut and provide a base for the railway lines. During the Depression, in the scrub bush that’s now covered with warehouses, there was a Hobo ‘jungle’, a camp for homeless people. China Creek became the City’s first unofficial dump site and trash from it spilled down and out over the remaining marshlands. Up until recently, there were open pits and tunnels dug in the brush along the edges of the C.N. right of way. Collectors and scavengers sifted through the layers of junk and history looking for buried treasure. The City posted ‘No Digging’ signs and eventually the brush was cleared and the impromptu midden paved over. But some people still dig. And some still make shelters there.
Just over my shoulder, the Skytrain swooped past, windows strobing, illuminating me briefly as it banked and then squealed away into the night, heading towards Downtown. I tossed the garland onto the top of the chain link fence and then standing on an overturned plastic bucket that I found en route, draped the garland and tied it into place. Looking out through the darkness, across the flats and even further – Patricia. 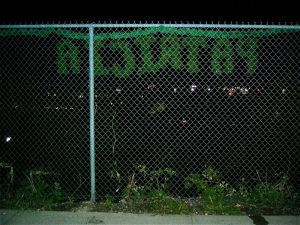