Hi All, If you’re in the UK neighbourhood this month, three of my short (i.e. 60 second) videos will be included in  various programmes for the One Minute Artists Moving Image Festival in Caernarfon, Wales. It happens  February 23-25 and it’s all curated by the fabulous Kerry Baldry. My 3 titles, Terminator (2012), Hello Stranger (2014) and Anthropocene Antiphony (2017) will be in good company with well over a hundred eclectic and exciting works and best of all, they’re all guaranteed to be only 1 minute long!

In Terminator, the ‘Activist’, in a symbolic act of resistance against the forces of ‘terminator’ seed technology, deposits a land mine of heirloom seeds, helping to turn an ordinary city lot into a potential urban sanctuary. 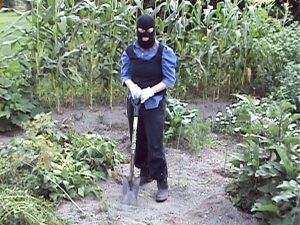 Hello Stranger features my performance alter ego Madillah, a transcultural symbol, an obscurely iconic other, whose image reaches out from an un-named time and place inviting the viewer to do the same: to become engaged an on-going, real time performance of examining difference and finding likeness. 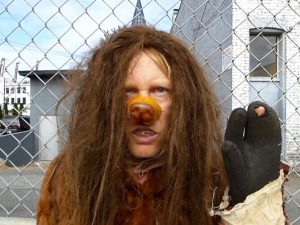 Anthropocene Antiphony is a lament, an elegy, or maybe even a dirge. A ‘call & response ‘ catalogue of fake news, alternative truths, disappearing ecosystems, forced migrations, spiking temperatures, rising tides and twitter storms, i.e. all the wonders and terrors of our unintended epoch. 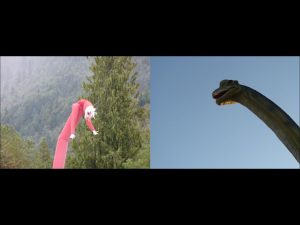 Please visit the website for times and more detailed info http://oneminutenorthwales.com/home/4593903713
and if you get a chance to catch any of the screenings, drop me a line and let me know what you think. xs