A cold night, Chinatown dark and almost deserted. I come out of the alley and slip into the empty storefront doorway and start to set up my ladder and out of the shadowed stairway that leads to the rooming house above comes a voice – “So, what’re you doing there?”.

James says he keeps an eye on the building and I say I’m putting up a decoration, a kind of tribute to someone who died and since the store has been empty for a long time, I didn’t think anyone would mind. He says he doesn’t care, but asks suspiciously if I’m one of those guys that are, you know, into old buildings and I say no, its only a sort of art project. He asks what the symbolism is and I say there’s no real symbolism, its just my way of remembering people from around here. Something that probably makes sense to no one but me, but something that I have to do.
We talk about the neighbourhood as I’m hanging the garland. He says he’s been down here 5 years and never had any problems, I say I’ve been down here around 15 and we both agree that it’s a pretty good community. He asks if I’m going to do a whole bunch of publicity, you know, call all the media down to watch me putting the garlands up. I say no. He’s glad, he says he’s tired of people coming in and doing stuff for the DTES only when the cameras are running. I say I’m mostly putting them up for people to come across on their own and maybe wonder about the name and think about someone they’ve known who’s died.
He seems to like this idea. He watches me finish tying up the garland and as I’m climbing down off the ladder he reads out loud the name – Cara. 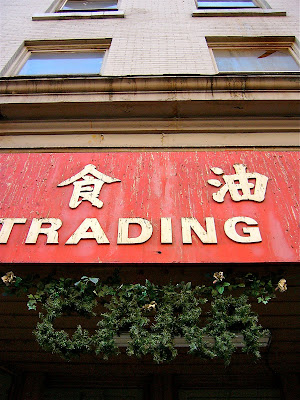