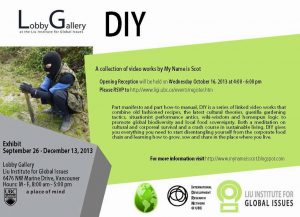 Hi all,
the opening reception for DIY happens this Wednesday, October 16th, from 4-6 pm @ the Liu Institute fro Gl0bal Issues which is located @ 6476 NW Marine Drive @ The University of British Columbia.
The show will be up until December 13th, 2013. If you get a chance to make it out for a look, I’d love to hear what you think! Hope to see you @ the opening or sometime soon x Scot
Here’s a little more info about the show –
DIY- a statement
Part manifesto and part how-to manual, DIY is a series of linked video works that combine old fashioned recipes, the latest cultural theories, guerilla gardening tactics, situationist performance antics, wiki-wisdom and homespun logic to promote global biodiversity and local food sovereignty.
The videos follow a black clad, ski-mask wearing figure called ‘The Activist’, as she sows seeds, picks vegetables, digs holes, performs a series of backyard interventions, and most importantly, preserves food for the coming winter. Titles including Digger, Chopper, Selfish Gene Theory, playfully explore the mystique of food production, the perceived militancy of  guerilla gardening and the inevitable bonds between culture and nature.
In Terminator, the ‘Activist’, in a symbolic act of resistance against the forces of ‘terminator’ seed technology, deposits a land mine of heirloom seeds, helping to turn an ordinary city lot into a potential urban sanctuary. Over –Extension Theory finds her sawing and sorting firewood and considering needs and wants in the real world and the symbolic world. In Time is Ripe  and The Process, she cans peaches and tomatoes and wonders about the relationships between global logistics, food processing and genetic well being. In The Race to the Bottom, ‘Green-washing’, Game theory, and Memetic theory are played out in the middle of a GMO cornfield and In The Great Divide, The Activist ponders social inequality, the politics of poverty and the responsibilities of the individual.
Locally, the last few years has witnessed a proliferation of urban farm markets, community gardens, and an inspiring increase in the number of individual consumers who are rejecting their role in the corporate food chain. Downturns in the global economy and climate change fears have prompted many consumers to become more aware of where their food comes from and what it actually takes to keep the supply lines open. Of course, for many people on the planet, the contingencies and consequences of a tenuous food chain are nothing new.
But ‘Big Food’ isn’t letting go of its market share willingly; the household cupboard of the West is still contested ground and the kitchen table of ‘Developing Nations’ is a potential battlefield. Chemical companies continue to pump out toxic cleaning agents alongside their new “green” line of products, “factory farms” may be going organic, but they still practice destructive monoculture on a mass scale, and Agri-business giants continue to develop strains of GMO and non- reproducing seeds (all the while, trying to make it illegal for individuals to propagate and maintain heritage seed banks).
Throughout history, populations have been managed or manipulated via the control of the food supply.  In a post 9-11 environment where ‘do it yourself’ activism is often equated with threatening behaviour,  it’s not too hard to imagine that individuals attempting to thwart state authorized food production practices might be labeled as eco-terrorists. In fact, Agri-Business giant Monsanto has been implicated in the burning of crops and the attempt to dictate farming practices in  a number of countries where it considers itself to have propriety rights over the methods of food production.
DIY imagines a multi-national, corporate driven, ‘green’ war which classifies guerilla gardening as an act of terrorism, drives home canning underground, calling it a threat to the stability of the fair market economy, spins backyard composting into a public bio-hazard, or claims that seed saving is bio- terrorism. While open warfare against Food Sovereignty hasn’t been declared yet, a good gardener always plans ahead. As the ‘Preppers’ (modern day hipster survivalists) like to say, “Resistance is Fertile!”
DIYis both a meditation on cultural and corporeal survival and a crash course in sustainable living, giving you everything you need to start disentangling yourself from the corporate food chain and learning how to grow, sow and share in the place where you live. 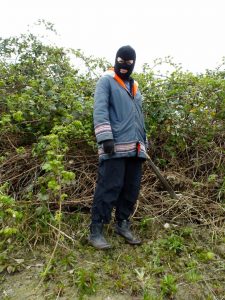