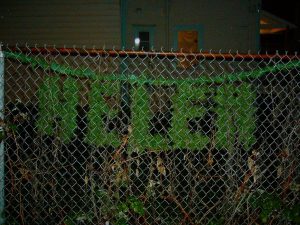 A cold rain, almost snow and I’m heading down Cordova in the dark when a woman, working on the other side of the street, angles through the traffic and runs up behind me to ask, gleefully, “Are you selling your wreaths?” I laugh, surprised, and say, “no, sorry” and she laughs, “ok” and we say, “see you later” to each other as she runs back across the street and off into the darkness. It’s spitting snow as I drape the garland over a fence on the edge of a vacant lot at the end of a row of old houses on Princess. They’ve been pretty run-down for a long time, but over the last year or so, they’ve been fixed up, a little at a time. A new layer of paint, some plastic tacked over the cracked window frames, and in the night, with softly glowing light leaking out through the curtains, they seem almost cozy. Later that night there’s snow and heading home, I see the woman’s coat, abandoned on the ground and no sign of her anywhere on the street.
The next day I’m back on Cordova, heading to the studio. The coat is gone, the sky’s bleak, the street is cold and the house that seemed warm and almost safe in the night looks emptied, the windows stare out across the vacant lot, waiting and watching for – Helen.