Material and conceptual concerns- from the proposal 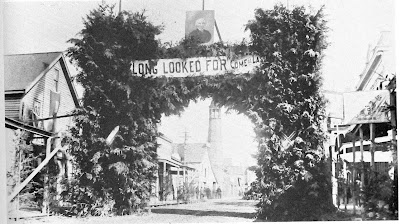 Materially and conceptually, the sculptural texts of Evergreen will reference the commemorative or celebratory arches which were commonly erected in Vancouver and other developing towns in British Columbia, at the turn of the last century to welcome visiting dignitaries or acknowledge specific events. These structures were usually draped in garlands and festoons of greenery, cut from the surrounding forest and often trimmed and shaped into messages of greeting or mottos of political import (see figures 1,2,&3 ). Evergreen also draws upon the more medieval tradition of the Maiden’s Garland (see figure 4 ), where a flower and foliage draped structure was erected in honour of a young woman who had died an untimely death. The garland was carried over the coffin at the funeral and later, hung in the church until it rotted away.
Both historical precedents for the work presume a level of propriety, worth or innocence associated with the individual or event being acknowledged, while contemporary media reportage of the “Missing Women” continues to construe a level of impropriety and a lack of innocence on the part of victimized women, all the while sensationalizing the victimizer. Conversely, I hope that the Individual sculpted names of Evergreen may become short term sites for remembering the individuals and/ or rallying points for refuting the scripted explanations for the violence that was done to them. Evergreen both alludes to the long term life force of the forest that still, to some extent, contextualizes the Vancouver’s urban experience and most importantly, promotes the notion that the women named will not be forgotten.
I would like the pieces of Evergreen to function in effect, as counter- monuments, in that they will be experienced randomly, outside of typical memorializing structures, using materials that visually disrupt the urban aesthetics of DTES, providing a simulated green space for contemplation, but avoiding a passive monumentalizing and instead, seeking to invoke an active commemoration within the public realm. I’m planning on installing the text garlands by late 2009 and early 2010. I’d like the pieces of Evergreen to serve as a counterpoint to some of the more facile civic “legacy building” that will accompany the 2010 Olympics. I see the project as an action that will ensure that the ongoing gentrification and pre-Games “clean-up” of the DTES does not occlude or preclude an acknowledgement of the issues and identities of those both past and present, who have lived and died there. 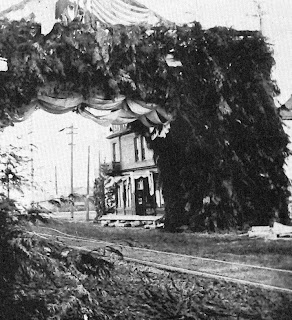