Behind Hastings, off Commercial 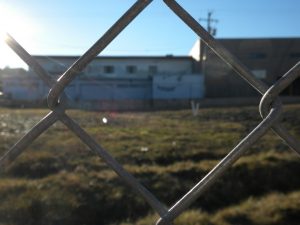 A lament, a warning, a plaint. All night long, I hear the sirens calling. Outside, squad cars tear up and down alleys, fire engines barge through busy intersections and ambulances, in pools of quavering amber light, huddle around bodies, cold and still on the sidewalk. The night after the morning after the second last Wednesday of the month. December. Hard times in the neighbourhood, the temperature is dropping, Christmas is fast approaching and people are hurting.

Making my way down Hastings, I’m overtaken by a pack of Paddy Wagons. Hanging up the garland, the sirens get louder and louder and I know what’s coming. Each time I freeze and for a few seconds, I’m caught in the staccato glare of flashing lights. But no one’s interested in me, there’s bigger and more desperate things going somewhere else. The vehicles careen past, lights pulsating, sirens keening away into the night.
The fenced off lot has been quarantined for so long that I can’t actually remember what used to be there. A gas station or some kind of factory? Either way, the business and the buildings are long gone and the soil left behind, corrupted. The ground has been churned up, sifted and then smashed flat again and the whole surface punctured by a grid of white PVC pipes, venting off the toxins. In the darkness, the pipes hover low over the ground, like pale ghosts. In the throbbing red light of passing emergency vehicles, they seem to leap up like outraged demons, dancing to the distorted wail of the sirens. I’m almost done when I see trembling blue lights tracing out the tops of the surrounding buildings. A troop of police cars seem to be combing the side streets, working their way towards me, so I tie the last knot fast and drift away quickly and don’t wait to document the garland. Back home, it takes me a long time to fall asleep. As I drop off, the yelping, moaning and snarling of the sirens merge and become one long, drawn out cry of protest.
After a black, sleety night, day breaks cold, clear and still. Fresh snow lies low on the North Shore mountains. I’m back at the lot early and the streets are quiet. For a little while. Long before I’m finished taking pictures, the stillness is broken by another police car screaming past and a few minutes later an ambulance follows dolefully behind. In the sharp morning light the rows of PVC pipes stand rigid like sentinels or mourners. 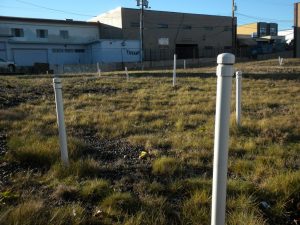 Some kinds of pain take a long, long time to go away. I know that the neighbourhood has had more than its fair share of tragedy, that some memories will always remain bitter and that the noise of the sirens will never fully fade, but hopefully, some things can change. Some demons will be laid to rest and some ground reclaimed. And while some people may want to, or need to, let go certain parts of the past, I hope that we will never forget – Tiffany. 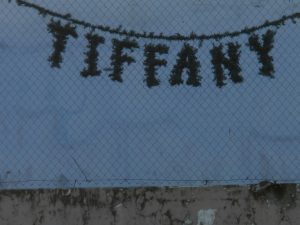 2 comments on “Behind Hastings, off Commercial”