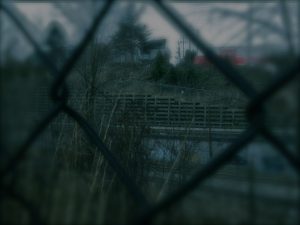 I squeeze past the fence and drop down under the bridge and onto the slope of the Grandview Cut. It’s early evening, New Year’s Eve, a few hours before the fireworks and cheering, the resolutions and regrets. The night air is hushed and the traffic up on Clark Drive is light and I hope that no one can see me as I trip over a patch of blackberries and go shooting down the steep incline, the frozen, matted grass making a perfect toboggan path, hurtling me towards the edge.

I manage to grab hold of the branches of some young evergreens and stop myself from disappearing into the darkness. I find my feet and then start angling my way further down the slope, cautiously moving from tree to tree, until I reach the fence that clings to the edge of the man-made ravine. It takes me a little while to untangle the garland, pull out the twigs and dead leaves that have got caught up in the letters during my tumble downhill, but then it goes up quickly and afterwards, I sit for a few minutes on the edge of the drop, catching my breath and listening for the sounds of the old year ebbing away. 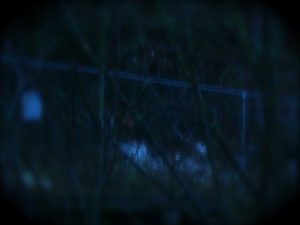 When I started Evergreen, over a year ago, I thought the project would go faster and I hoped I’d be able to keep some distance from the tangle of emotions and politics that surrounds the tragedy. But of course, things turned out differently. The more carefully I considered everything that I was doing, the more time I needed to take and the more I had to feel.
The construction of each garland couldn’t be rushed, the process became a kind of meditation on the identity and the absence of the individual behind each name. A personal one, bound up with the makings of my own identity and woven together with some of my own losses. Each name needed to be fully honoured, each spot, that the garland would eventually occupy, had to be carefully sought out. Some spaces, after long consideration, just weren’t right, other places revealed themselves in an instant, seemed to call out to me as I walked through the streets, searching. For whatever length of time each garland stayed up, I imagined that the marginal space it adorned seemed a little less neglected, not entirely abandoned. And every time a garland disappeared, the sadness and sense of outrage I felt, for the loss of the person behind the name, got deeper. 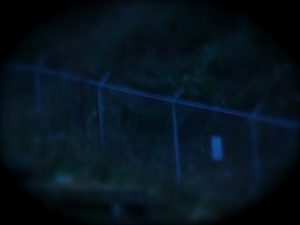 While the project I’ve set out to do is almost complete, with only two more garlands to install, two more names to acknowledge, you and I both know that there’s a lot of other work that needs to be done, many more names that need remembering. But for now, this is all I can do. 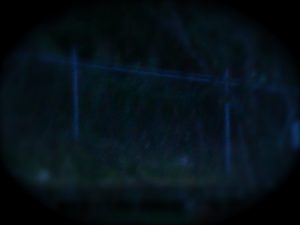 I look out and across the darkness and catch a brief glimpse of nearly empty train cars flashing by on the other side; it seems that almost everyone is already where they want to be on this last night of the year. The air is getting colder, I can see my breath and I’m stiff from sitting on the frozen ground. I pull myself carefully back up the slope and head off to ring in another year.
Much later, in the first tentative hours of 2011, I’m riding in the back of the Knight St. bus, heading along Clark and as it passes over the Grandview Cut, I look over my shoulder and out the window, but can’t see anything, just flickering streetlights and the dark outlines of silhouetted evergreens. 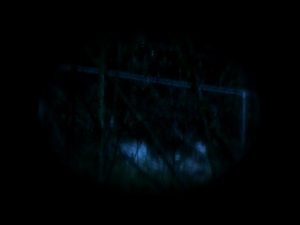 This garland is placed in a pretty secluded spot, it almost feels like a private space, even though it’s on the edge of a number of very public thoroughfares. But I know it’s there and now, you know too. It may be hard to read the name through the trees, especially in Spring, when things start growing again, but you might catch a glimpse of it one day, when you sail by on the Skytrain and look down, just past the giant cross, on the other side of Clark, where the road spans the ravine. Or you might not, the garland may be long gone by the time you read this. But the name will never disappear, from one year to another it will always be – Dianne. 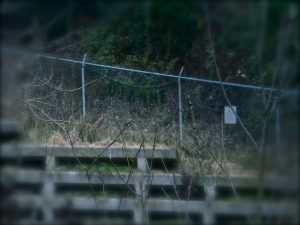 2 comments on “Just east of Clark Drive, below 6th Ave.”