There used to be a row of tiny little houses, just shacks really, down from the corner, fronting right onto Princess. They were old, tilting at odd angles and held together mostly by layers and layers of paint. But someone always seemed to make a point of keeping the stoops clean and covered with pots of flowers and in summer, the doorways were usually festooned with climbing Scarlet Runner beans. One day the houses were emptied. They became immediately shoddier, got boarded up and then they were gone and the site became a gravel parking lot. Next door, right on the corner of Hastings were two old cafes, sitting side by side. One closed down, then the other and after the storefronts had sat vacant for a while, the gutted spaces were turned into a makeshift women’s drop-in shelter. Then about a year ago, they were both knocked down and the whole corner lot was dug up and from the bottom of a big pit rose the concrete foundations and ramparts of what is going to be the new Union Gospel Mission Centre.
This Good Friday with darkness falling, the winds rising steadily and rain squalls battering the neighbourhood, I headed out to hang up another garland. Hastings was awash with tumbling umbrellas and sodden sleeping bags. Emptied garbage bags and wet blankets sailed down the middle of the street likes ghosts. The lineup for Easter dinner at the old UGM on Cordova stretched around the block and up into the alley and hugged the wall on the lee side of the new building site. As gale force winds tore sheets of plywood off billboard hoardings and tossed branches, bottles, pillows, paper plates, melon rinds, and backpacks through the air with equal ease, I pulled myself up onto the base of the scaffolding built out over the sidewalk and lashed the garland tightly to the side of the structure. Fluttering and snapping in the wind, like a pennant on the mast of a ship turned into the face of the storm – Jennifer. 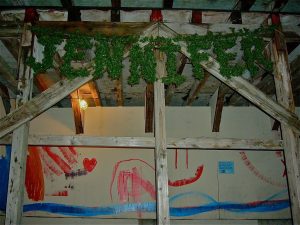