Powell, just past the Cordova Diversion 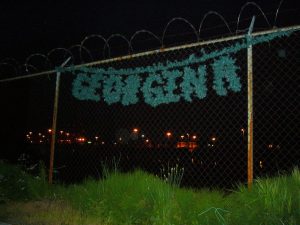 Earlier tonight, as a friend and I were cutting through Gastown, we were noticing, not for the first time, how much the area’s changing. Water Street was full of people just hanging out and not because they were going to be sleeping there later on. There was music and laughter and a lot of money being spent in the restaurants, bars and stores and it wasn’t all by tourists. There’s a whole new batch of people living in the ‘hood, which means a lot of added pressure on the people who are going to be sleeping rough. I suppose there’s a few good things that come with the changes, but I still get touchy threading my way through the well dressed drunks and angry, when neighbourhood landmarks get reno’ed for ‘loft-style’ condos and incensed, when unofficial resting spots and the few remaining patches of untamed green space get razed or re-purposed.

I know it’s an inevitable part of gentrification and even though I’ve lived down here for years, I guess I’m a part of it all. I imagine it’s probably not much better than what happened when the area was taken over for first time. I keep hoping that this time ’round it’ll be different, the people moving here will want to support the heritage of the area, save some of the history and respect the rights of it’s long term inhabitants. But some days, that kind of change seems a long ways off.
Later that night, as I left my studio with the garland, there was an unmarked police cruiser idling out front and radio noise coming from another one, waiting with it’s lights off, just around the corner. I passed by a new storefront gallery with a smart-ass poster in the window that read, ” There Is No Romance In Taking A Risk”. Heading east, down Powell, the streets were quiet but not empty. Single figures wove through the darkness and settled in doorways or sat on the curb, watching the night. The rain held off and a row of blooming trees just before Hawks Avenue filled the street with scent.
Just past where Powell and Cordova merge, the train tracks run right up against the road and there’s a fairly serious chain-link fence that does it’s best to cut off access to the waterfront. Beyond the razor wire, a row of shunting rail cars rattles back and forth and past them, cranes and piers and container ships are waiting in the harbour. Across Burrard Inlet, on the other side of the First Narrows bridge, West Van climbs out of the black water and the lights of the North Shore flicker like the embers of a distant fire and somewhere beyond that – Georgina.

2 comments on “Powell, just past the Cordova Diversion”