A while ago a friend of mine was poking around online and she came across a bunch of sites with images from Evergreen. People who’d come across the garlands on the streets, taken pictures and posted them with comments that wondered what they were all about. There was a whole online discussion going back and forth about what the garlands referred to and whom the names belonged to. It was one of the kinds of dialogue I was hoping for, people from all over bringing their own associations and feelings to the work and deciding on their own interpretations or sharing ideas and collaborating with others to find meaning. One of the comment threads eventually worked its way back to me with an anonymous request to contact another unknown person about being involved in some kind of an exhibition. I was a little hesitant, I was heading out of town the next day, I had no idea who was behind the request or if they were being serious and I wasn’t even sure that the garlands belonged in a gallery setting, but it seemed important to follow the process all the way through.

So I responded and one contact led to another and I was very generously invited to include one of the garlands in the Surge Festival, July 30th -August 28th,which is opening up the W2/Storyeum space this summer, (www.creativetechnology.org/events/surge-festival-of-urban). The festival is being dubbed the 1st annual festival of Urban Digital Culture and it seemed like it might be the right place to try and talk about what it is to be named or unknown or mediated in the DTES. It turned out I ‘sort of’ knew a lot of the people involved and they ‘sort of’ knew about me but we’d never really connected each other’s names with our faces and various on and off-line identities. As each of the four components of the festival was going to include work from community activists and artists and collectives all concerned and involved with maintaining and nurturing the wide range of DTES voices, in the end, despite the short notice, I felt I should say yes.
I got back into town the day before the opening and rushed down to hang the garland. The space looked huge, dark and empty, a lot of the work still needed to be hung, but people were working hard in the shadows. I hugged tight to tall pillars, 14 feet up in the air and slowly worked the garland ropes into place.
The night of the opening the space still looked huge and dark, but it slowly filled up and from out of the shadows more people came who had seen the garlands around but not known who they were about or why I had been putting them up. I talked a fair bit about Evergreen that night, answered a lot of questions, asked some others and listened to a lot of stories. People told me about seeing the garlands and knowing the people behind the names. I felt I’d made the right decision to be involved and was grateful for the ‘anonymous’ support of Evergreen. At some point in the night I looked up and there, above me and out of reach, but a part of it all – Jacquelene. 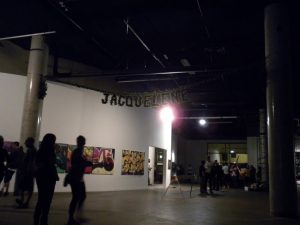