I was up and on my way before it was light. Gulls were crying and calling to each other on the rooftops, the air was cool, almost cold and there was a heavy dew on the ground, but already the neighbourhood was hard at work. An early start to the day, a late end to a long night.

Where Hastings arches up and passes over Raymur and the train tracks cut underneath, there’s a big plot of land that slopes down from Glen drive. It’s hemmed in by a barbed wire topped, chain link fence and from the outside, it looks almost overgrown with scrub. Actually, there’s two sides to the lot. The chunk of land on the south side of the overpass is pretty much covered over with weeds and brush, but on one edge, down towards the tracks, the brush has been cut back and someone’s built a couple of raised beds and planted vegetables and a few flowers.
A thick wall of towering blackberries lines the inside of the fence that surrounds the north side of the lot. From a distance it looks sealed off, like there’s no way in, but at the bottom of the slope, right underneath the overpass, the chain link’s been peeled back a bit and if you duck down and crawl past the small gap, there’s a tunnel that leads you under the blackberries and on through, to the inside.
Once you’re in there, it feels quiet, the waking sounds of the surrounding warehouses and manufacturers are muffled and it’s a bit like being in a thicket in a forest. But it’s no secret garden. All around the edges of the lot, little niches have been carved into the brush for sleeping. Tucked into the dark bushes for another night, wet blankets and musty quilts, or tossed away for ever, tangles of pantyhose and socks, broken high heels and soiled jeans. Halfway up the slope, in the dead centre of the lot there’s a bare scab of lifeless hardpan, where nothing grows. Even the blackberries won’t take root. The only thing poking out of the ground is a stack of crumpled up computer motherboards and the half buried shell of a gutted monitor.
I make all this out in the half light. The dull whine of morning traffic up on Hastings is building into a steady roar, creeping down through the fence and the bushes and slowly driving away the quiet. I get to work and drag an abandoned home-made ladder up the slope.
Overhead, the gulls that have been dipping and skimming through the dull sky the whole time, drop down lower to investigate. The blackberries are thinner here and I work my way past and weave them back to prop the ladder up against the perimeter fence. I’m on top and starting to thread the garland through the barbed wire when dawn breaks. The sky is suddenly a bright clear blue and the joyful shrieking of the gulls drowns out all the noise of the cars and the light of the new day spills down into the lot and for a second or two, looking back over my shoulder, filled with light and warmth, it does look a bit like a sanctuary or a garden. I finish tying the garland, climb back down and leave the way I came.
At the top of the slope, facing east, in the morning sun – Sereena. 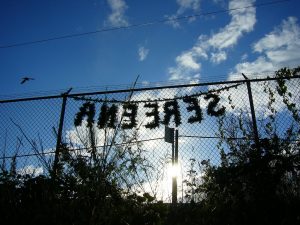