Powell, at the foot of Victoria 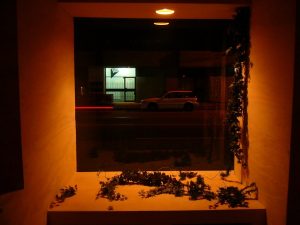 From out of the blue, a long lost colleague, with some very thoughtful things to say about Evergreen and a request to consider installing one of the garlands as part of a public art project that he’s been conducting. Every Letter In The Alphabet is the name of the space, an old storefront down along Powell, next to the tracks at the foot of Victoria. An area I’d been scouting out for a while, trying to find a place for one of the garlands. Maybe it was a sign? 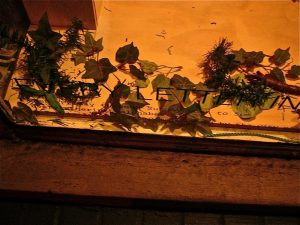 I head down late in the day, get help clearing out the window wells and by the time I get organized, it’s getting dark and I’m alone in the space. Red taillights slide by outside and the area feels deserted, but I know that the nearby streets and alleys are not all empty. After a while, a van pulls up out front and someone unloads a set of drums and amplifiers and then people start trickling by, in twos and threes until suddenly there’s a crowd built up on the sidewalk. Everyone is laughing and talking and shouting, there’s an opening underway at the gallery next door and a band is playing somewhere in the building. People wander past, looking in at me, lit up in the window like I’m part of the show and I stare back at them, clustered together on the dark sidewalk outside, like they’re part of a different show. 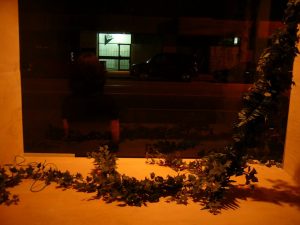 I feel a little uncomfortable being watched, but keep focused on finding the right pieces of fake ivy and fir and soon I forget about everything, except the name that I’m weaving together. I’m almost done and standing outside on the sidewalk, checking the lighting, when a slightly drunk man separates himself from the crowd and staggers over to stand swaying in front of the window. He looks up at the letters hanging there, but can’t quite figure out what they spell. The three he can make out he reads aloud, slowly – D, N, A, ‘I wonder what the symbolism of that is…?’, he mutters, half to himself and half to me. I don’t know how to answer him. 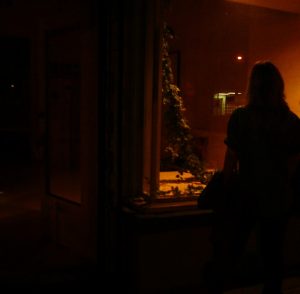 Over the last few weeks, a number of the garlands have been ripped apart or cut down. Sometimes I’ll find stray letters, randomly scattered along the street, spelling nothing. Occasionally, half a name, intact, with bits and pieces of the other letters lying nearby, crushed and crumpled into strange, suggestive shapes. A few of the garlands have been violently wrenched apart. Torn and twisted into erratic green lines. Every letter a distorted, indecipherable message left sprawling on the ground. Or else, a whole garland simply vanishes, overnight. I expected all these things to happen, sooner or later. But what I didn’t plan on were all the things I would feel, every time it happened. Anger, sadness, betrayal and more, keep welling up and none of them feel related to ‘art’ disappearing. When I got asked to put up this latest garland, in the storefront window, I was kind of glad; this one would be protected for a while and I made it a little more delicate and decorative than some of the other garlands. I wanted this one to last a little longer. I wonder what the symbolism of that is…? 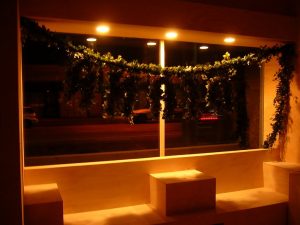 I keep thinking about being inside or outside of the glass. About feelings that last and art that doesn’t and the show that we’re all a part of. About what happens to people when we can only read them as symbols or signs. And about all the names and faces that will not fade. 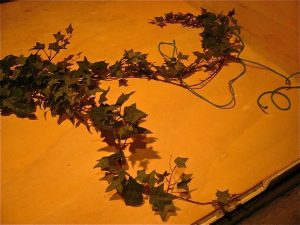 For now, above the dark sidewalk in the light of a storefront window, five letters, put together, to spell out – Diana. 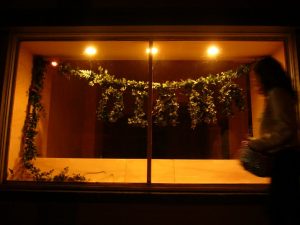