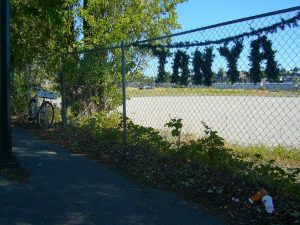 On the south side of Terminal, there’s a parcel of empty land that’s bordered on one side by tall Lombardy Poplars. The land has been scraped level and filled with gravel and the other three sides have been demarcated by roadways and a new sidewalk and sooner or later the rest of it will be filled up. Until then, the Poplars turn the north edge of the parcel into a small slice of forest and even though there’s garbage and junk dumped all through the underbrush, it’s still kind of pretty. Peak rush hour and the sun off the pavement is blinding, but there’s a little breeze that gets picked up by the trees and it helps to make the spot feel more restful than it actually is. Traffic streams by, commuters racing back to the suburbs and overhead, the Skytrain roars past, crammed with people heading for home and there, in the shade at the base of the Poplars – Tanya