It’s evening when the rain lifts and the night sky is almost bright as a gang of drunk karaoke girls spill out of the Met bar and into the alley for a smoke break. Screeching with laughter, they don’t seem to notice the rats teeming all around them. I start to climb under the fence and into the empty lot that’s for sale across the alley, until I notice that the rats have the same idea. 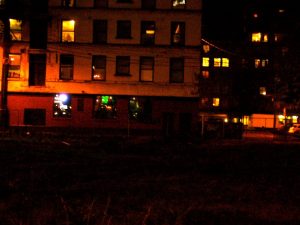 Instead, I opt for scuttling further down the alley, tossing the garland over the fence and tying it up so that it’ll face out towards Hastings. The sky gets darker. Up above me and across the street, on Abbot, the newly illuminated, old ‘W’ spins slowly; an intellectual property. Meanwhile, good natured drunks are stumbling over the backwards letters of the garland, trying to read the name out loud and I’m trying to ignore the sound of rats, fighting and hunting in the garbage and rubble of the pitch black ground. 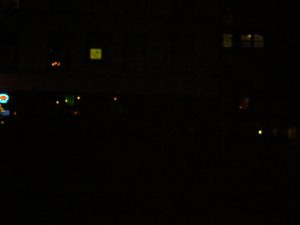 Early next morning, the bar’s quiet, the alley’s hosed down and the rats have holed up for the day. 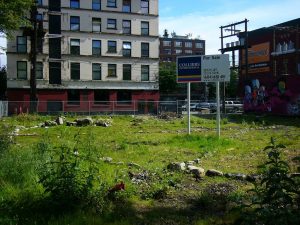 I’m coming along Hastings and admiring the Butterfly bushes, which are doing their best to take back the vacant lot before it gets built on, when a white van idling in the alley pulls away, revealing – Andrea.