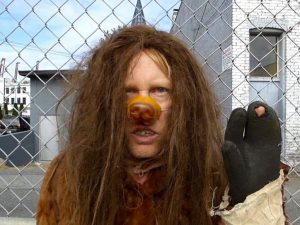 Hello Stranger, a video featuring my feral creature familiar Madillah, is finally going to be making his on screen Vancouver debut in Moving Arts 2016, a short programme of silent moving images curated as part of  “As the Crow Flies”, the 20th Anniversary exhibition of the Eastside Culture Crawl.

Hello Stranger has screened in places as far flung as India, Portugal, Bulgaria, the U.K. and Berlin and I’m excited that after loping globally for the last few years, Madillah will be able to do some local lurking! The exhibition opens tonight, October 21st from 6-9 pm @ the Arts Factory, 281 Industrial Avenue and continues at this location until November 6th. The Moving Arts programme will also be on view November 17-20 @ the Charles Clarke Gallery, 1345 Clark Drive. For more info on times etc. please follow the link http://culturecrawl.ca/events/movingart2016 . 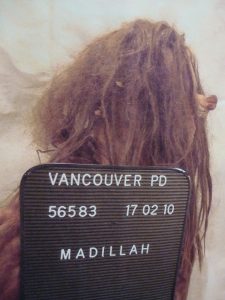 If you’re curious about the video, here’s a short synopsis:

Hello Stranger features Madillah, a transcultural symbol, an obscurely iconic other, who haunts the interstices of the virtual and actual and the borderlands of urban spaces everywhere. Emanating from somewhere far behind the digital façade and set against the backdrop of an indefinable city, his image appears first on one side of a chain link fence and then on the other, facing away from us and then gesturing towards an unseen viewer. Is he seeking acceptance, bestowing recognition or asking for our help?
Questions immediately arise about the nature of this character: what is his cultural background or species, where is his actual location? A hybrid refugee, folklore oddity, homeless human or an alien enemy? His guise and gestures are an unknown commodity, reflecting our uncertainties about the veracity or viability of cultural authenticity in the face of an increasingly manufactured ‘global’ citizenship. Is he something to be feared or pitied or, is he perhaps, someone who can be trusted to understand our deeper, stranger motivations? 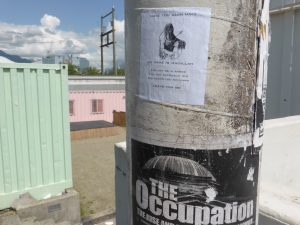 In an age of dispersal and dissimulation, where geopolitical conflict, climate emergencies and the scrutiny of ever present security camera can script anyone as a potential threat to an increasingly fragile status quo, perhaps Madillah’s greeting is a signal to the outsider that may exist inside us all; a confirmation of our presence, an affirmation of our ‘likeness’. 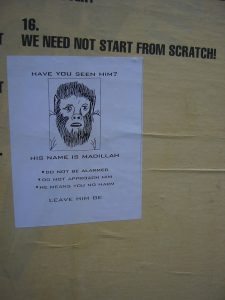 His image reaching across the confines of the mediated landscape, asks us to do the same: to find a way to identify with the people who exist beyond the borders of our physical space or psychic comfort zones, to reach out and become engaged in the on-going and real time experience of acknowledging difference and finding connection in the world we share with others.

Actually, it’ll probably take longer to read the above than to catch the video, which clocks in at only 1 minute. The piece was originally designed to be displayed looped on monitors in the Sophia underground subway system. But oddly enough, it seems to work nicely in a variety of settings. If you’re able to have a look, please let me know what you think!

And if you’re curious to know more about the origins and/or various manifestations of Madillah, feel free to search for his back story in the pages of this blog, just look for the Madillah tag or label.

Hope the Autumn is being kind to you all x Scot