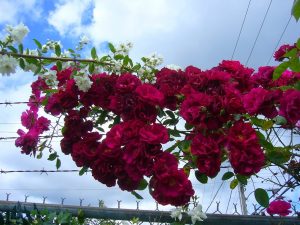 The project ends with the name it all began with. I can’t really say that I knew her, but for a long time, I used to see her almost every day. And then one day, I didn’t see her ever again.

The first time we met it was dusk, almost dark and I’d been combing the alleys behind Hastings Street looking for scrap lumber, abandoned clothes and other interesting bits and pieces (i.e. art materials) and I stumbled out of the alley with a load of stuff on my back and abruptly turned the corner on to Pender and almost collided with her. She’d been coming around the corner from the other direction and was as lost in her world as I was in mine, and suddenly there we were, staring at each other, face to face, frozen under the glare of the corner streetlamp.
We both gasped aloud and for half a second, we thought we were going to turn right around and disappear back the way we’d come from, but instead, we stood still in our tracks, just quietly looking at each other and then she broke the awkward silence with a giggle and the biggest smile I’d seen in a long, long time. We said a tentative hello and then she bounded off around the corner and disappeared into the twilight, like a deer slipping into the forest.
Whenever we’d meet after that, passing on Hastings or wandering along the fringes of Chinatown, we’d say hi and maybe share a few words. She’d wonder about the backpacks full of junk I’d be carrying, I’d comment on her outfit or compliment the current stuffed animal she’d have clutched under her arm and we both probably looked a little strange to anyone zipping past us on the bus, but that didn’t matter. What mattered was that for a minute or two we were not alone anymore in our own worlds, we’d accepted each other’s presence and the street was not such an empty or challenging place. Our lives were connected in a very simple way; we were neighbours. There were days when she looked lost or disturbed by things that only she could see and there were days when it was all I could do to catch or hold on to another person’s gaze, but every time we bumped into each other, her face would break into that huge, beautiful smile, which would stay with me for the rest of the day.
All this was years ago, when my studio was down on Cordova and I spent a good part of each day walking back and forth through the neighbourhood, searching the backstreets for supplies, going to Army and Navy for dollar packs of hardware or the old Save-On-Meats for day old bread. My new studio space is up off Powell Street now and I still spend a fair amount of time wandering the nearby alleys, looking for more odds and ends or just looking and remembering.
It took too many years to find out what happened to her and it will take a long, long time to accept the way she was found.
Across the street from my old studio space, there’s now a stack of condos, a wedding shop, a salon/day spa and a designer clothing boutique and right next door, is a fancy Italian restaurant. Army and Navy is still Army and Navy and Save-On-Meats has re-opened and seems to be trying to bridge the gap between the old and the new phases of the neigbourhood, but some things about the area have changed forever. And some people are still missing.
I’ve put off writing this for a couple months now, it’s been hard to figure out what to say or how to sum things up. With this post, the Evergreen project is officially complete and while I’m hoping that people will keep stumbling upon the site and remembering the names, I know that sooner or later, traffic will drop off and people will stop looking for new garlands or stop seeing the ones that are out there still. As the Downtown Eastside continues to be developed and the area keeps changing, some feelings will fade, it’s inevitable, and there will be new people, moving into the neighbourhood, who don’t know or want to know about a past they haven’t been a part of and I suppose there’s no way around that either. But in doing this project, I’ve also learned that there are a lot of people who won’t forget, people who cared for and still care for those who are missing and many people who are working hard to make sure that what happened, never happens again.
It took me a long time to install the last garland. I wanted to find the perfect spot, somewhere that represented everything that Evergreen was about. I searched the neighbourhood for a long time, looked everywhere, but in the end, I hung the garland somewhere close to me. It’s in a place where I see it almost every day and each time I walk past the garland, I remember her big smile and hear her voice in my head and I speak her name aloud – Angela. 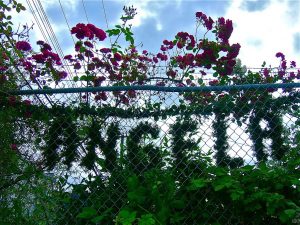