Shoot Me! – A Synopsis 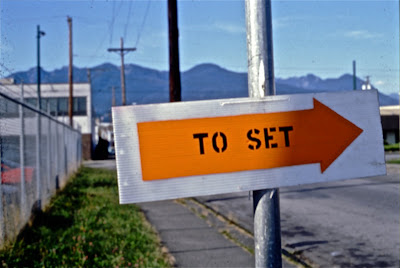 The last few posts are texts from a project called Shoot Me! They’re based on extracts from filming notices I’ve been collecting over the last few years, from productions shot in my neighborhood, Vancouver’s Downtown Eastside. I think of them as “picture in picture” narratives, but they can be read as screenplays for unseen performances or closed captioned storyboards or maybe even stage directions, for walking the increasingly fine line that separates the real from the unreal on the streets of the DTES.
I’ve lifted location details and scene descriptions directly from the notices, cut and pasted fragments of dialogue and film lingo from the shooting scripts, call sheets and screenplays that I’ve found discarded on the streets and then re-mixed the whole thing to try and reveal the sometimes uncanny, occasionally inconsiderate and often uncomfortable narrative overlaps between life as lived in one of Canada’s poorest postal codes and life as filtered through the lens of Hollywood North.
The DTES has always been a kind of ground zero for Hollywood North productions, being malleable enough to be dressed up for mid-town Manhattan, stripped down for small town, depression era Mid-west, or more often than not, filmed almost as is, to mimic the urban ghetto of Anytown, USA . Alleys get cleaned up, hosed down and then re-filled with “prop” garbage, neighbourhood residents get hustled out of the way and replaced with extras dressed to look like the very people they’ve displaced. TV shows are filmed about serial killers while local women are disappearing on the same streets that “fake” police cars are cruising. As a long time resident of the area, at some point, you can no longer tell if the “Crime Scene” tape is real or a prop. Like it or not you find yourself cast as an extra and scripted into storylines and scenarios that are not always of your own choosing.
The film production notices themselves are usually a bland mixture of damage control and boosterism; filled with thumbnail sketches of the action, mundane parking restriction info, apologies for noise, pleas for late night filming extensions, tantalizing hints about the “Stars” involved and thanks in advance for “your support of B.C.’s film industry”. Reading between the lines, there’s a wealth of other information about money, agency, gentrification and identity.
In the texts I’ve composed, I’ve maintained and/or recreated the original formatting of the source document text – i.e. aspects of spacing/layout, Italics to signify either the title of the film being produced or to note quoted dialogue and the use of Caps or Bold type to denote specific times/ location info. Fracture, Revolution and The Butterfly effect 1&2 are built entirely out of text excerpted from production notices, call sheets, and screenplays. The other piece, Re-Write, is a screenplay-esque treatment of two actual incidents that occurred in conjunction with filming in the DTES ( the placement of a cryptic billboard for a Canadian TV series new season, in the middle of “The Stroll” and another production company’s hanging of a prop female corpse, right behind the Women’s Drop-in Shelter, both events occuring during the height of the search for the neighbourhood’s missing women).
The images in between the texts include scans of discarded film ephemera, as well as pictures I’ve taken, documenting actual film shoots in the neighbourhood. There are also a few images from an earlier project of mine called Hollywood, Not, where I hand painted a number of fictitious film signs and hung them in anticipation of upcoming film shoots.
Collectively, the texts function as a sort of mise en scène of the area’s supposed meta-narrative. Individual pieces can be read as Cinéma Vérité call sheets, cutaway shots of the cutting room floor, or perhaps, a montage of real-time rushes or dailies, from the filmed on location pilot, based on a true story, about life in a make believe place called – ‘The Downtown Eastside’.
Or maybe Shoot Me! is just my attempt to script myself into the mix, so I can figure out which side of the camera I’m really on.