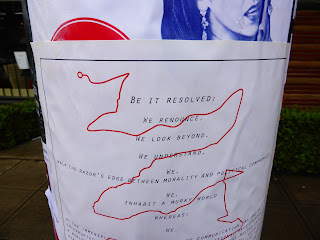 I’m very pleased to announce 2 new projects being presented as part of the Rent Assembly event  http://rentassembly.org/ happening in Vancouver, May 24 -26. 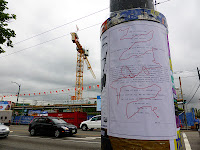 Rent Assembly: a gathering of renters in a time of siege, considers the historic roots, economic causes, and cultural implications of Vancouver’s growing divide, with readings, performances, panel discussions and art actions that explore various aspects of gentrification, colonialism and class struggle, as set against the backdrop of Vancouver’s increasingly unaffordable housing market. 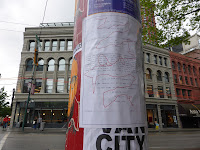 For the first project, Rental Agreement, I’ve created a poster which I’ll be putting up on the streets, adjacent to some of the event locations and along the general migratory routes throughout the city frequented by my fellow renters. The poster stylistically embodies a proclamation and features a short text that makes nods to both Marx and the Canadian TV series Da Vinci’s Inquest (filmed in Vancouver’s Downtown Eastside (DTES), alluding to the ways in which we all are potentially ‘renting’ the spaces (or bodies) that we inhabit. The graphic element of the poster implies a peripatetic movement through zones of temporary shelter, or the erratic ECG readout of a revenant body politic. 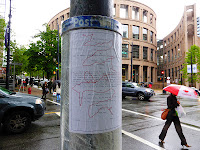 The second project, Self Guided Walking Tour 1-5, consists of 5 short digital slideshows looped together, featuring a selection of photographic images I’ve taken over the last 10 years, documenting the seemingly vanquished objects and the increasingly contested interstitial spaces of the DTES. Each ‘tour’ contrives to visually immerse the viewer in a historically and emotionally charged territory littered with the relational signifiers of ownership, authority and agency. The slideshow is being screened at the closing event @ Instant Coffee, 441 Powell, Sunday May 26, 7-10 pm. 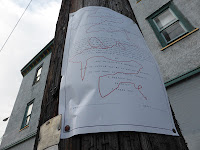 If you’re in town this weekend, I hope you can make it to an event or two or at least maybe catch a glimpse of one of the posters in your neighbourhood. And if you’re out there ‘under siege’ in another place, good luck and I’ve got extra posters if you want to bring them to your contested territories ! 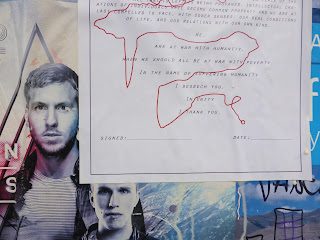