New Work in Vancouver this September.

busy getting ready for three presentations of my work in Vancouver this September: a performance for LIVE 2013 International Performance Art Biennale, a collection of video works at the Liu Institute for Global Issues at U.BC. and a reading @ Word Festival. Looking forward to showing in the city and getting some feedback from you! Here’s a little info about what to expect.

First up, the performance, a collaboration with Leannej called Human Identification at a Distance. 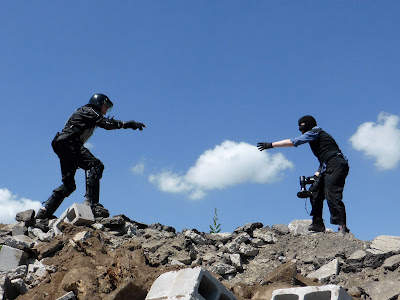 Human Identification at a Distance is an exercise in sousveillance or inverse surveillance, an attempt to subvert the self monitoring that conditions our public expectations and cloaks our private emotions. The goal of the performance is obliquely confrontational, covertly confessional;  two figures, co-opt the gestural guises and costumed coding of ‘Authority’ and ‘Activist’, setting out from opposing points, marching through the crowd, broadcasting individual monologues, probing, measuring, interrogating, exploring the  constructions and consequences of separation and connection. Their movements ultimately define a shared space and the figures converge, their individual voices blurred in an antiphonic chorus of recognition and misidentification.
While the namesake program developed by the U.S. Information Awareness Office (IAO), ‘Human Identification at a Distance’ employs biometric systems in order to: “… identify humans as unique individuals (not necessarily by name)…at any time of the day or night … possibly alone, disguised or in groups…”, with this performance, and the ensuing dialogue, Leannej & I hope to support the unguarded expression of personal traits and private thoughts and promote unprejudiced public encounters that occur beyond, or in spite of, the bounds of CCTV culture.
Many thanks to Randy Gledhill of LIVE 2013 for inviting us to participate. The Performance happens September 21st @ Victory Square, 150 W Hastings (South West Corner) @ 2:30 PM sharp. For more info: livebiennale.ca
Next up is DIY, a collection of video works @ the Liu Institute. 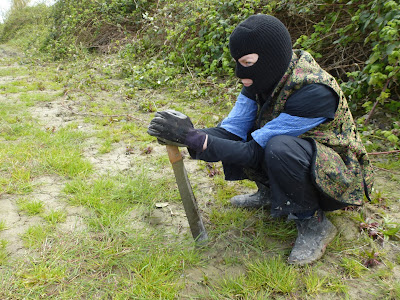 Part manifesto and part how-to manual, DIY is a series of linked video works that combine old fashioned recipes, the latest cultural theories, guerilla gardening tactics, situationist performance antics, wiki-wisdom and homespun logic to promote global biodiversity and local food sovereignty. Both a meditation on cultural and corporeal survival and a crash course in sustainable living, DIY gives you everything you need to start disentangling yourself from the corporate food chain and learning how to grow, sow and share in the place where you live.
One or two of these videos have been in online festivals, but most of these pieces have never been screened in the real world. Individual pieces are linked together into a programme of about 50 minutes and with titles like Selfish Gene Theory, Chopper, and The Race To The Bottom, I’m hoping there will be something that speaks to you!
The Liu Institute for Global Issues is located @ 6476 NW Marine Drive @ The University of British Columbia. The opening reception happens Wednesday, October 16th, 4-7 PM. The show will be up until December 21st and regular hours are Monday – Friday, 8 – 5PM. For more info: liu.institute@ubc.ca

And finally, I’ve been invited to read from V6A: Writing from Vancouver’s Downtown Eastside for the Word Festival ( formerly Word on the Street), which will be happening outside the main VPL branch @ Georgia and Robson.  I’ll be reading a piece called Skid Row: Establishing Footage, which is composed entirely of language culled from Film Production notices posted in the DTES. Its from a series I call Shoot Me!, which explores the often uncomfortable narrative overlaps between what’s being scripted and what’s being played out for real in the neighbourhood. Look for me on Sunday, September 29th in the C.U.P.E. Poetry Tent, sometime around 11 AM.

If you’re able to make it out to any of these events, I’d love to hear what you think.  At any rate, hope to see you soon.